Blog Index | Brushstrokes about me

If you are reading this blog, I suppose you know about window managers and desktops. But for those who don’t; on GNU/Linux the graphic environment (named Desktop) is just one more piece of the operating system which can be changed or modified as any other. So there are several options and the user can choose. Desktop environments can be very different.

I’ve been on GNU/Linux for about 14 years and I’ve seen a lot of evolution on graphical interfaces. I remember my first desktop, it was a horrible KDE on Suse Linux. Afterwards I jumped to Gentoo and started using Gnome. But at that time compile something as huge as Gnome was quite a pain so I started moving over light environments.

I pass over many of them, like Fluxbox, Openbox, Xfce4 and I finally stop for some time at Enlightenment 16 (and afterwards 17). It was so cool! With real transparency and very colored and futuristic stuff everywhere.

Then, at the same time, appeared the revolution of AIGLX and Compiz. I’m pretty sure many people here remember those amazing effects (the Cube was the favorite). But there were so much of them that most of the GNU/Linux Desktops at that time were like drunked Salvador Dali paintings.

But after some time everyone (including myself) realized that cool effects does not mean usability and everyone come back to standard, less fancy, stuff. Then I found Awesome (yes! this is the real name of it).

Awesome introduced a new desktop concept: the screen is a grid and the different windows (like Firefox, Pidgin, terminals) fit inside this grid. Once you open a new application the grid modifies itself and the window is added to it. In addition everything is managed using the keyboard and all the configuration is made by typing Lua code.

So many hackers use Awesome because, in my opinion, it is the most usable desktop for someone who spends 8-12 hours per day with a computer. Very flexible (you can do whatever you want if you know how), light and fast. On the beginning Awesome is painful, you have to learn how it works and make a lot of customization. But once you got it, it just feels an extension of your hands and yourself.

Going back to my personal story, after several years using it, new versions of Awesome destroyed my customization (they introduced changes not backwards compatible). So one day, after performing a system upgrade and realizing that all the graphical interface was broken I decided to change.

My thoughts at that moment were: I’ve played with this for so many time, now I need something that just works, I don’t want to deal with this stuff anymore. So I jumped to KDE4 and all this set of programs running in the background that I don’t use and neither understand. Note: I spent a lot of time configuring all the shortcuts from Awesome to KDE4, because I really missed them.

Now, after 4 years, my laptop has problems with the temperature because the CPU fan is not working as it should. Looking at the processes of the system, I realized that the CPU was too busy, even when I was not doing any important stuff on the computer. KDE4/Gnome3 are too big, I don’t need most of the things included and they are truly affecting the performance of my system (even on a 2 cores, 4 threads, Intel i7).

I got some spare time and I decided to try again Awesome (installing it is just a matter of few MB, so why not?). Of course I’m using some Gnome applications like the NetworkManager applet, or the Blueman stuff which, in general, make things easier. But my processor now is much colder and not so busy all the time.

So, oh yeah! I realized it was a mistake to abandon Awesome. I’m so happy now with my desktop that I decided to write a non sense post entry like this one!

I just can say, Awesome is awesome. 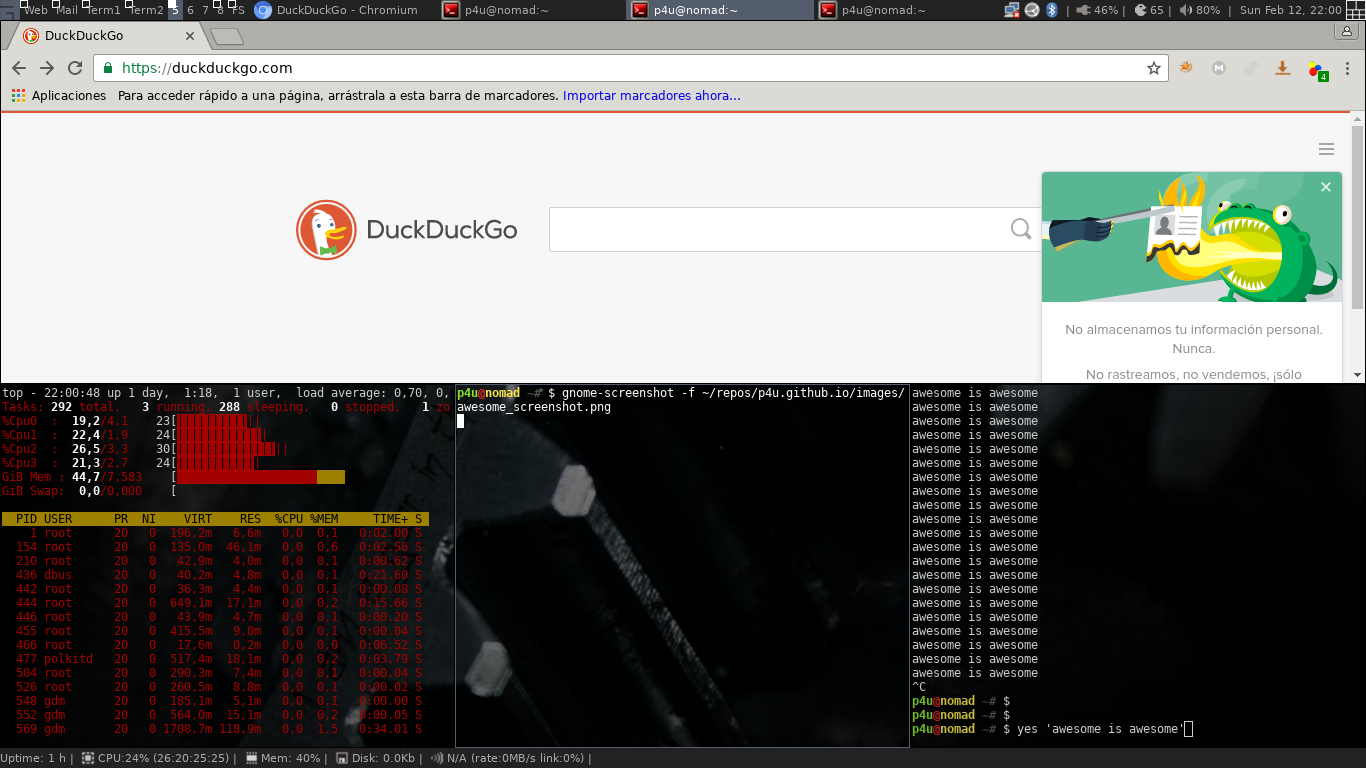